The Symbols of Olympic Games

These five rings -- blue, yellow, black, green and red -- represent the five parts of the world now encompassed by Olympism and ready to compete against each other. Moreover, the six colours (including the white background) thus combined represent those of all nations, without exception. The blue and yellow of Sweden, the blue and white of Greece, the French, English, American, German, Belgian, Italian and Hungarian tricolours, the yellow and red of Spain are side by side with the new. Brazilian and Australian flags, the old Japan and the new China. It is a true international emblem."
As an image of Olympism, Coubertin thought the rings had deep significance: that of the union between men. He multiplied the image to create a total of five rings. He designed and commissioned the Olympic flag to mark the 20th anniversary of the IOC's founding, on 23rd June 1914 in Paris. Coubertin never said nor wrote that he saw a link between the colours of the rings and the continents. For him, the five rings represented the union of the five continents, but the colours were merely those that appeared in all the different national flags at the time.

The Official Mascots of the Beijing 2008 Olympic Games

Like the Five Olympic Rings from which they draw their color and inspiration, Fuwa will serve as the Official Mascots of Beijing 2008 Olympic Games, carrying a message of friendship and peace -- and good wishes from China -- to children all over the world.
Designed to express the playful qualities of five little children who form an intimate circle of friends, Fuwa also embody the natural characteristics of four of China's most populaanimals -- the Fish, the Panda, the Tibetan Antelope, the Swallow -- and the Olympic Flame.
Each of Fuwa has a rhyming two-syllable name -- a traditional way of expressing affection for children in China. Beibei is the Fish, Jingjing is the Panda, Huanhuan is the Olympic Flame, Yingying is the Tibetan Antelope and Nini is the Swallow.
When you put their names together -- Bei Jing Huan Ying Ni -- they say "Welcome to Beijing," offering a warm invitation that reflects the mission of Fuwa as young ambassadors for the Olympic Games.
Fuwa also embody both the landscape and the dreams and aspirations of people from every part of the vast country of China. In their origins and their headpieces, you can see the five elements of nature -- the sea, forest, fire, earth and sky -- all stylistically rendered in ways that represent the deep traditional influences of Chinese folk art and ornamentation.

Design of the Medal for the Beijing 2008 Olympic Games 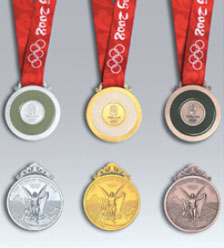 The medal for the Beijing 2008 Olympic Games is designed with inspiration coming from "bi", China's ancient jade piece inscribed with dragon pattern. The medals, made of gold and jade, symbolize nobility and virtue and are embodiment of traditional Chinese values of ethics and honor, sending forth strong Chinese flavor.
The medals are 70mm in diameter and 6mm in thickness. On the front side, the medal adopts standard design prescribed by the International Olympic Committee. While on the back, the medal is inlaid with jade with the Beijing Games emblem engraved in the metal centerpiece. The design inspiration of the medal hook derives from jade "huang", a ceremonial jade piece with decoration of double dragon pattern and "Pu", the reed mat pattern.Noble and elegant, the Beijing Olympic Games medal is a blending of traditional Chinese culture and the Olympism. It gives the winners of the Games great honor and acclamation as recognition of their achievement.