Beijing Capital International Airport is located in northeast of Beijing, capital of People's Republic of China, and 25.35km from the Tiananmen Square, center of Beijing city. It is not only an aviation gateway of Beijing and a window for international communication, but also a radial center for China civil aviation network, featured in a large-scale international airport, with most important location, biggest scale, fullest facilities and busiest transportation in China.

Pudong International Airport is located in the east of Shanghai, covering an area of 40 km2, about 30 km away from the city center, and about 40 km away from Hongqiao International Airport.
Project Phase I of Pudong Inter- national Airport started officially in Oct. 1997 and completed in Sep. 1999. Project Phase I has one 4E South-north runway (4000m×60m), two parallel taxiways, 800,000 m2 apron, seventy-six aircraft positions, 50,000m2 cargo warehouse, and also equipped with the system of navigation,communication, surveillance, weathering and logistics service etc. It is capable of providing 24-hour round service.

Hongqiao International Airport is located in the western suburbs of Shanghai, only 13 kilometers away from the city center. For many years, it has always been an alternative name of Shanghai airport. Since 1996, Hongqiao International Airport has consecutively won the first prize among airport group with an annual passenger throughput of over eight million in the “Passengers Poll for Civil Aviation” activities organized by China’s civil aviation industry.

Established in the 1930s, Guangzhou Baiyun International Airport is one of the three large hub airports in the Chinese mainland, holding a decisively important status in the layout of China’s civil airports. It ranked the second best airport in the appraisal of China’s 500 biggest enterprises in service industry in 1994. It was listed as one of the Top 500 State-owned Enterprises in 1994 and was selected by the CAAC as “Airport with Best Service” in 1998.

Hong Kong International Airport is the main airport in Hong Kong. It is colloquially known as Chek Lap Kok Airport (赤鱲角機場), because it was built on the island of Chek Lap Kok by land reclamation, and also to distinguish it from the old Hong Kong Airport (Kai Tak). 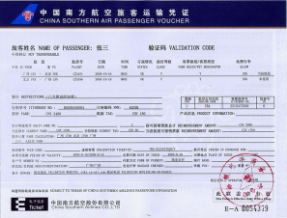 1. Most major airlines in China are now able to issue E-tickets but not all of them.
2. E-tickets are more common to flights between larger cities than those on lesser routes.
3. Foreign traveler holding electronic ticket need only show their passports to board the plane but need to ensure that the name on the e-ticket is exactly the same as the name on the passport.
4. A confirmation code will be issued for each e-ticket.

What are the baggage regulations when flying inside China? 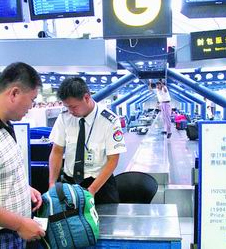 Check-in Baggage: Adult and children are entitled to a free checked baggage allowance of 40kg, for first class, 30kg, for business class, and 20kg, for economy class while traveling on domestic airlines in China. No free baggage allowance is granted to infants.

Groups traveling together are able to combine their baggage allowance if they check in together.

Prohibited Items: The following items are prohibited and cannot be carried in checked or carry on luggage:- Flammable, explosive, corrosive, poisonous, radioactive, polymerizable and magnetized materials. Passengers are forbidden to carry arms, sharp or lethal weapons during flight.